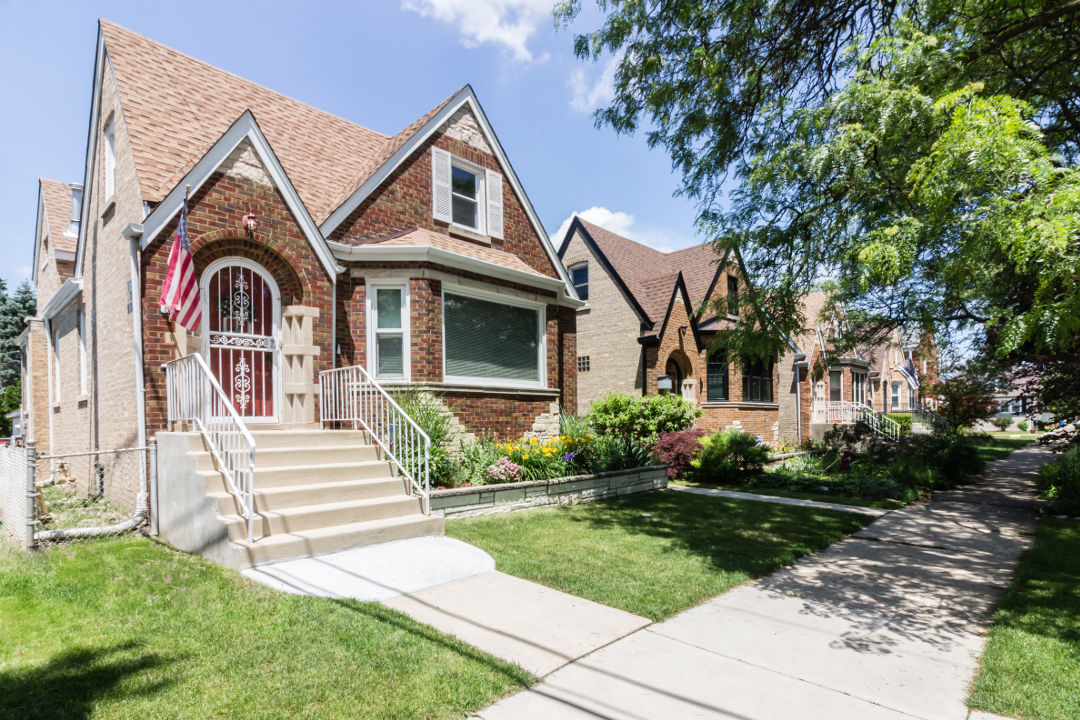 Homeowners Jennifer and David and their two sons live in a cute Chicago “Cape Cod” or “Tudor” one-and-a-half story house in a great neighborhood. As their family grew, they were faced with a question familiar to many - would it be more economical to move or remodel their home? David crunched the numbers and they decided to stay and to convert their unfinished attic into living space.

For this project, Jennifer and David first worked with Dan Hatch of Hatch Architecture Studio to develop the drawings. The plans called for adding two more dormers to the attic, one for a bathroom and one for a new staircase. The finished attic would also house a master bedroom within the existing two dormers, an office, and tons of storage.

Although they wanted to make the most of their space and have modern conveniences, Jennifer and David also wanted to respect their home’s original architecture. We couldn’t agree more, so it was a perfect fit when their architect referred them to Leader Builders for the general contracting.

It was most important that the added dormers look original to the house, so brick was the material of choice for the facade. Indeed, when you look at the finished project you would never know that two of the dormers are new as they match the existing ones so well. 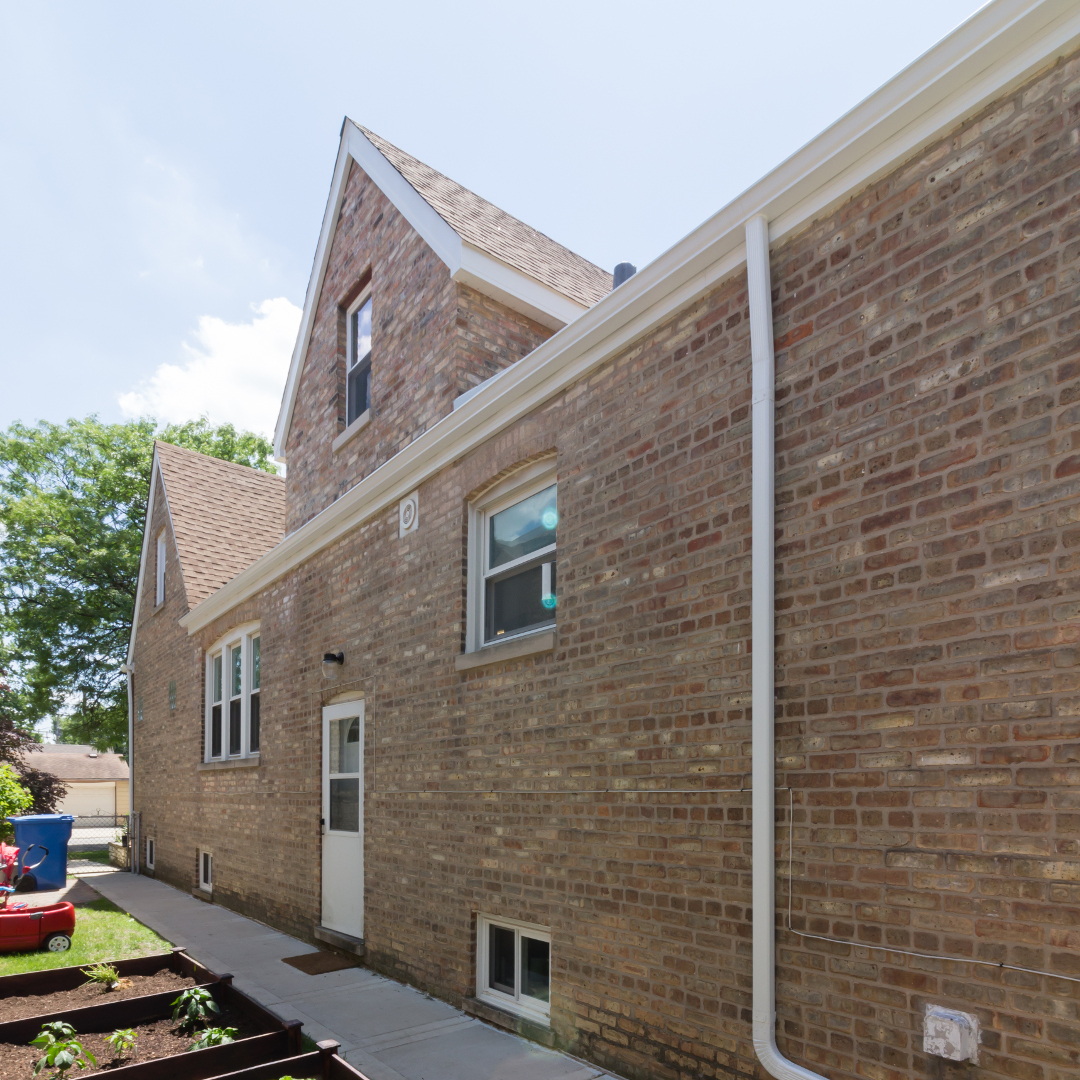 Jennifer and David were also keen on keeping original elements on the interior. They loved the character of the exposed brick in their bedroom-to-be, with its years of aging and weathering. They fought to keep it, and we’re glad they were able to - it makes for some wonderful accent walls. (Had they not been able to keep it, a brick veneer was the back-up plan.) 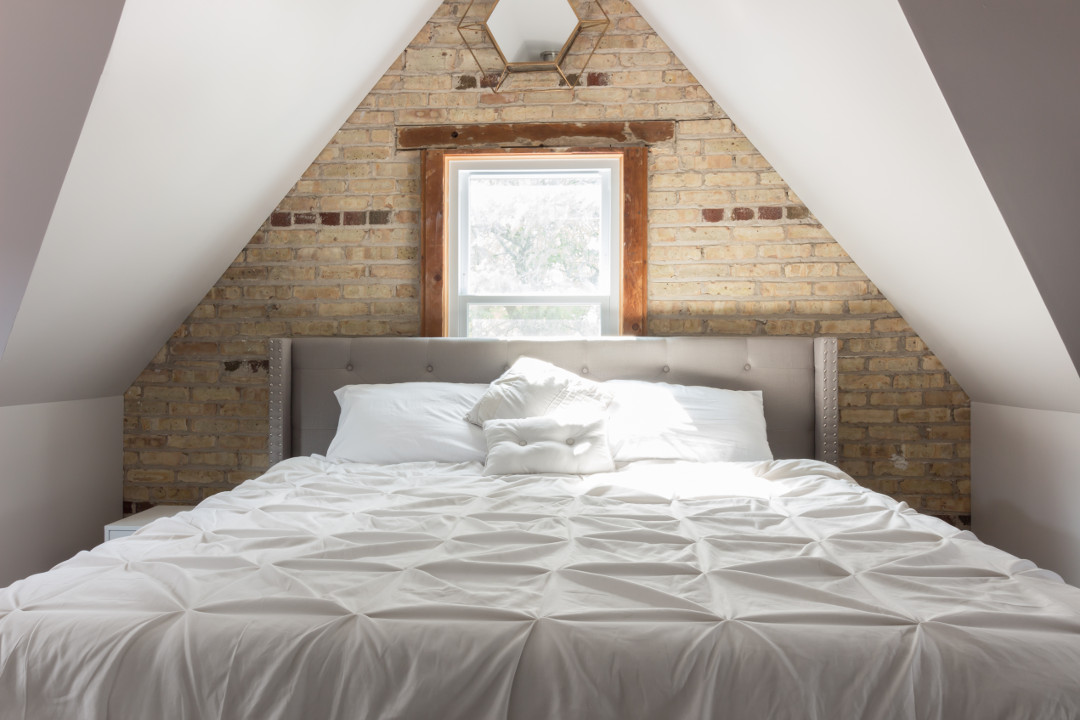 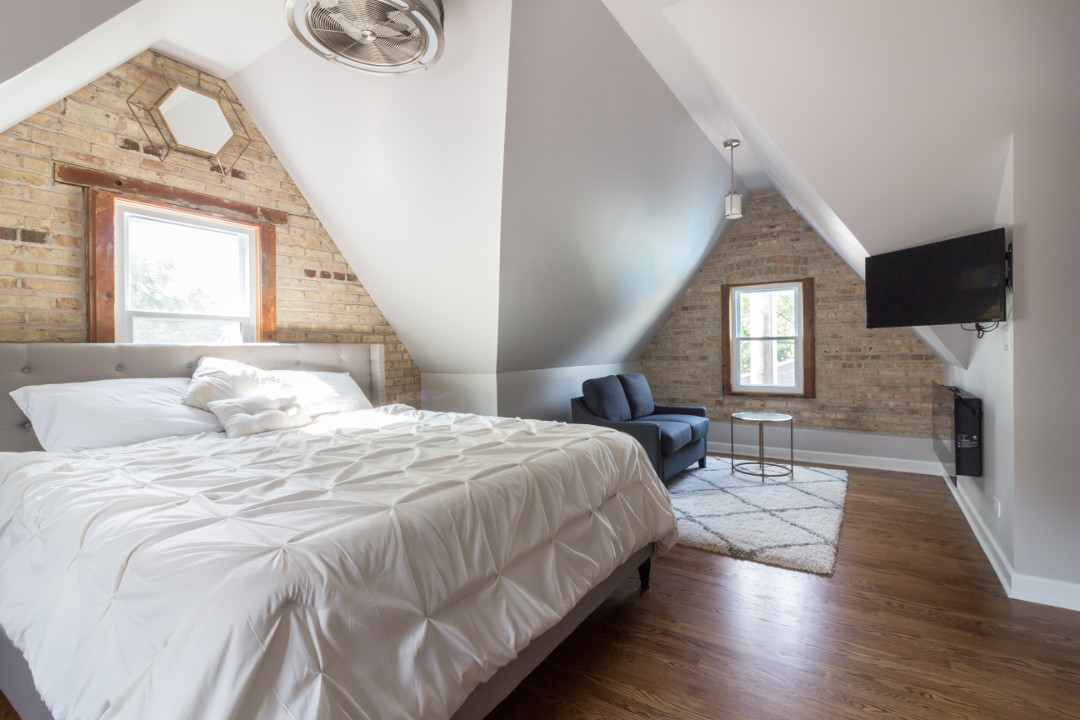 They also loved the angles created by the pitched roof and dormers - Jennifer says a flat ceiling was never part of the plan. The photos below show how the joists in the center of the ceiling were raised to take full advantage of the height and the A-frame shape. 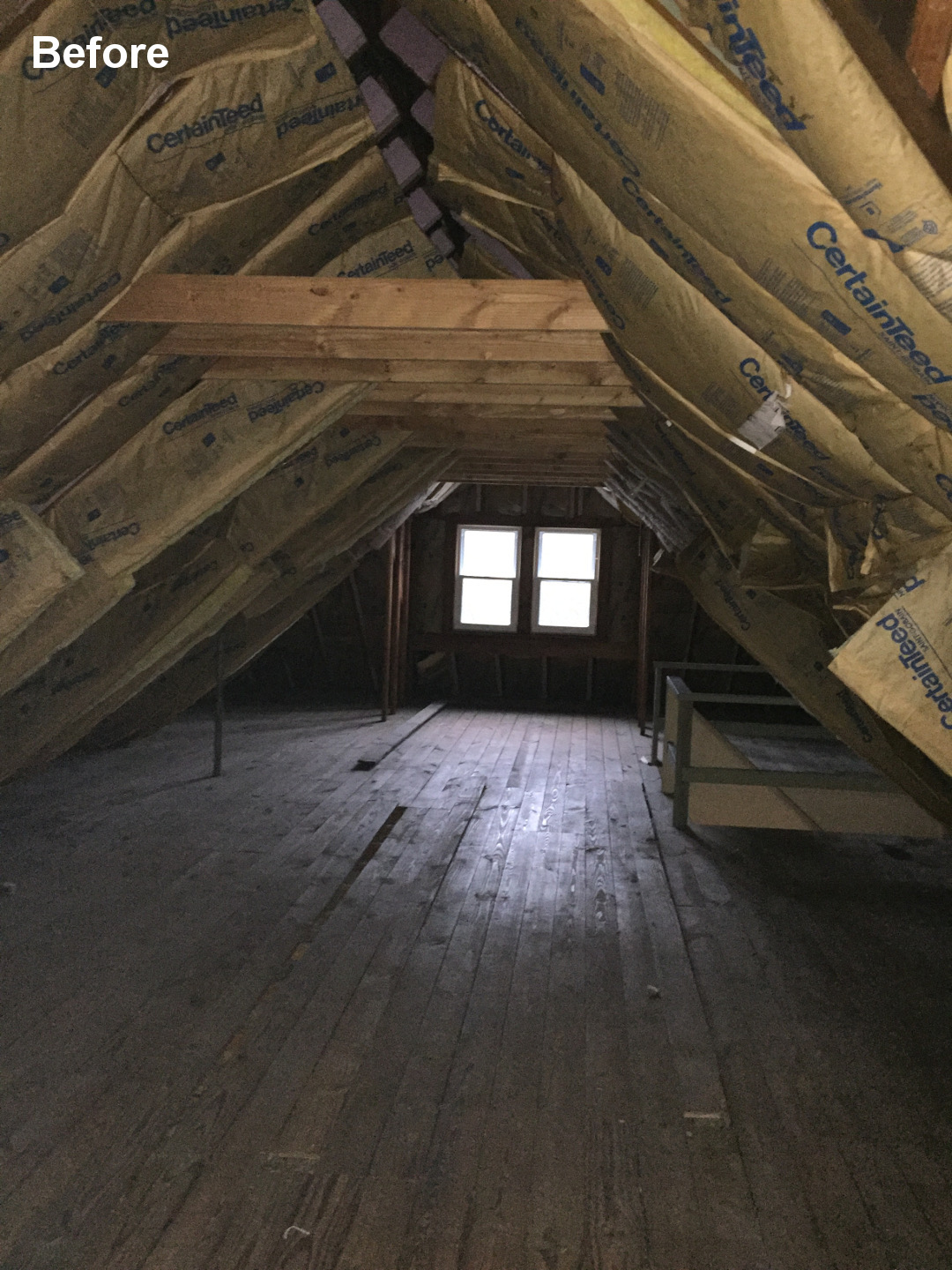 Before (photo provided by the owners) 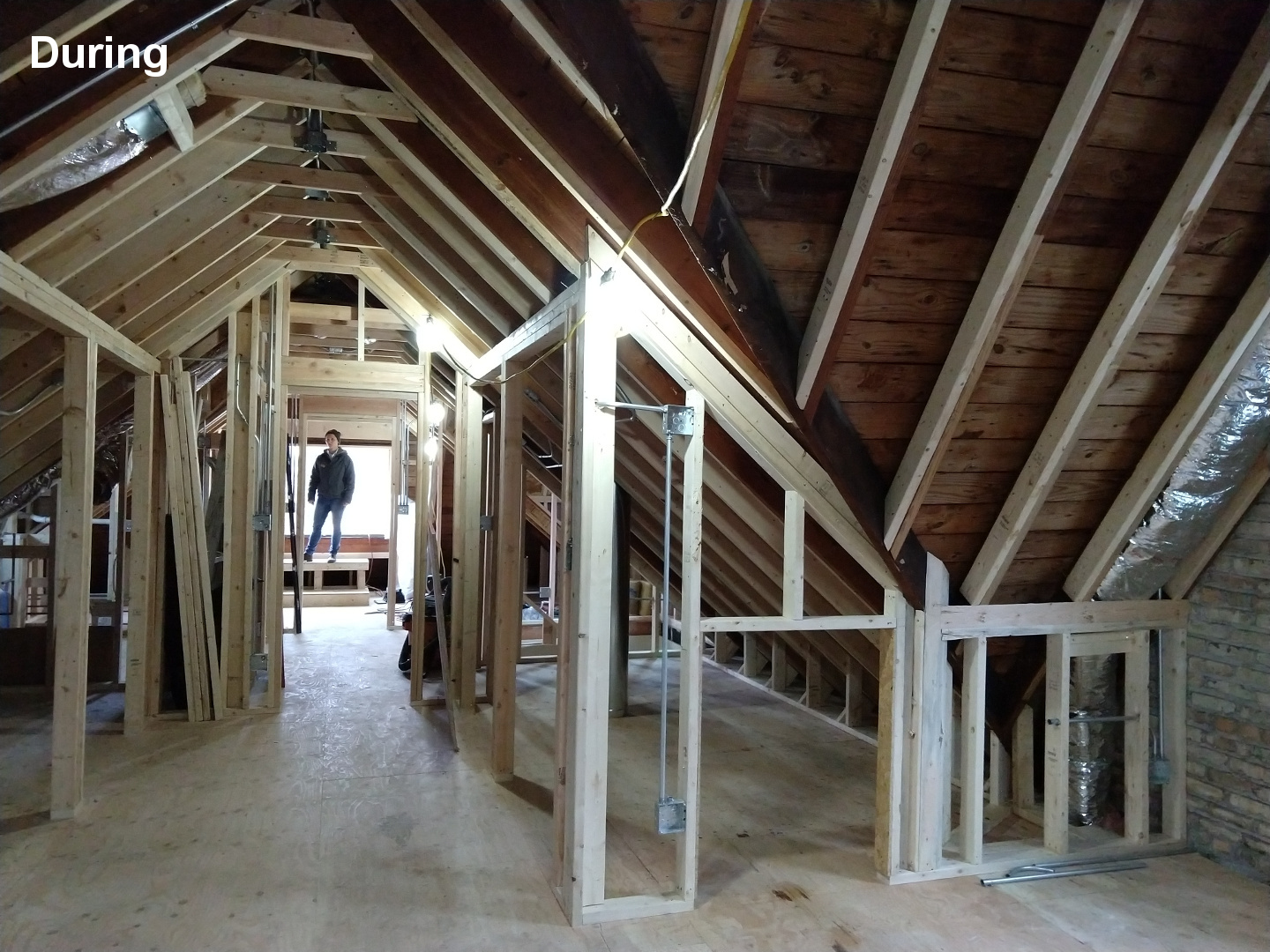 When it came time to decide on an HVAC system, Jennifer and David considered ductless because it would take up less space and each room could be set to its own temperature. After speaking in length with many people, they decided to go with the time-tested ducting, but we were able to run it strategically so they could keep their vaulted ceilings. In the photo below, a duct runs the length of the back wall, concealed by a ledge that can double as a plant stand or bookshelf. The first and second floor are on two seperate systems, which they control with Nest thermostats. 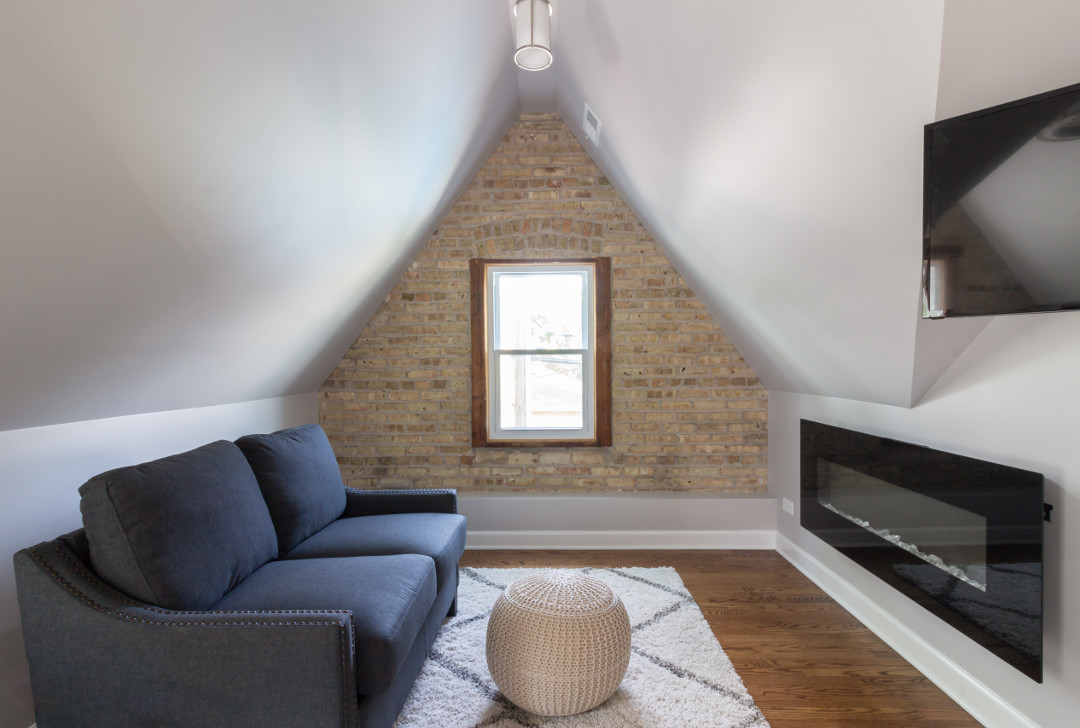 Jennifer and David also did their research on insulation for their attic. They decided on a hybrid approach of 3” closed cell spray foam, followed by fiberglass batt insulation, then 1” of rigid foam board. This approach satisfied their desire for minimal spray foam while still meeting code (which requires spray foam for high ceilings). Jennifer says the new insulation helps cool down the first floor along with the second.

Jennifer’s experiences growing up in her parents’ bungalow informed many of their decisions, including the addition of a secret passage! Her parents’ house had a secret passage behind a dresser that ran the length of the house, and she has fond memories of playing hide-and-seek there as a kid. For her own kids, they created a secret passage in the crawl space of their closet, accessed by a kid-sized door. 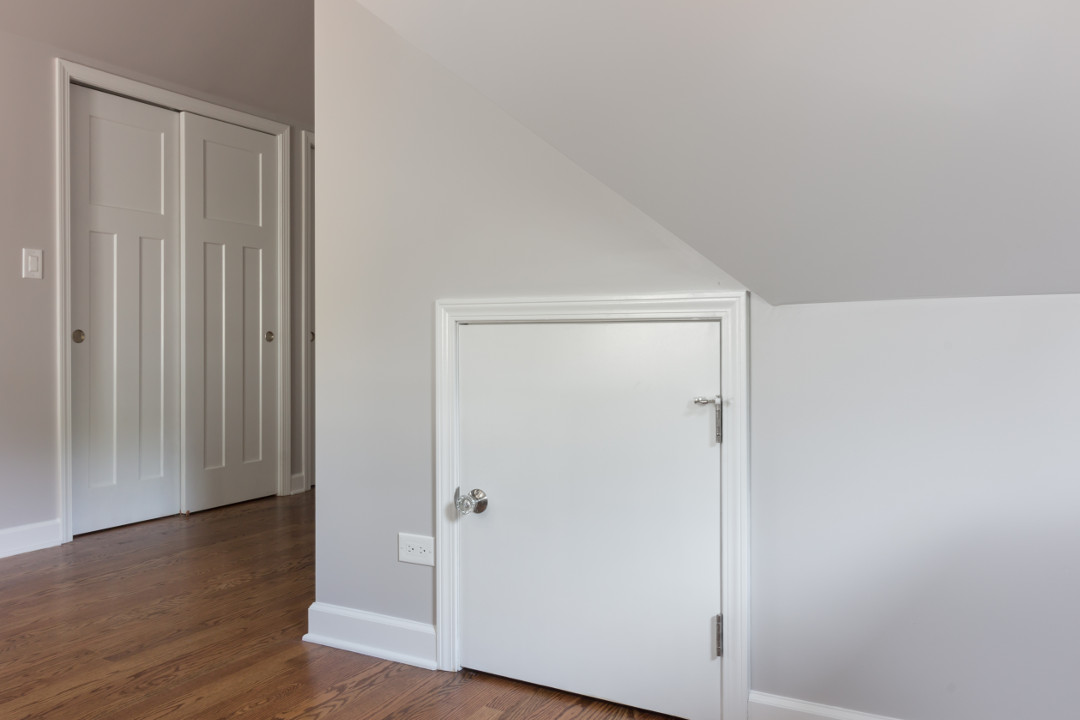 Storage space abounds in the new rooms - there are his and hers closets in the master bedroom, a closet for cleaning supplies in the hallway, and a full wall of built-ins in the bathroom. They ordered the bathroom built-ins from Lowe’s after having a great customer service experience there with their kitchen cabinets. It took a little bit of on-site customization to get the cabinets to fit perfectly against the sloped ceiling, but the end result is well worth it. 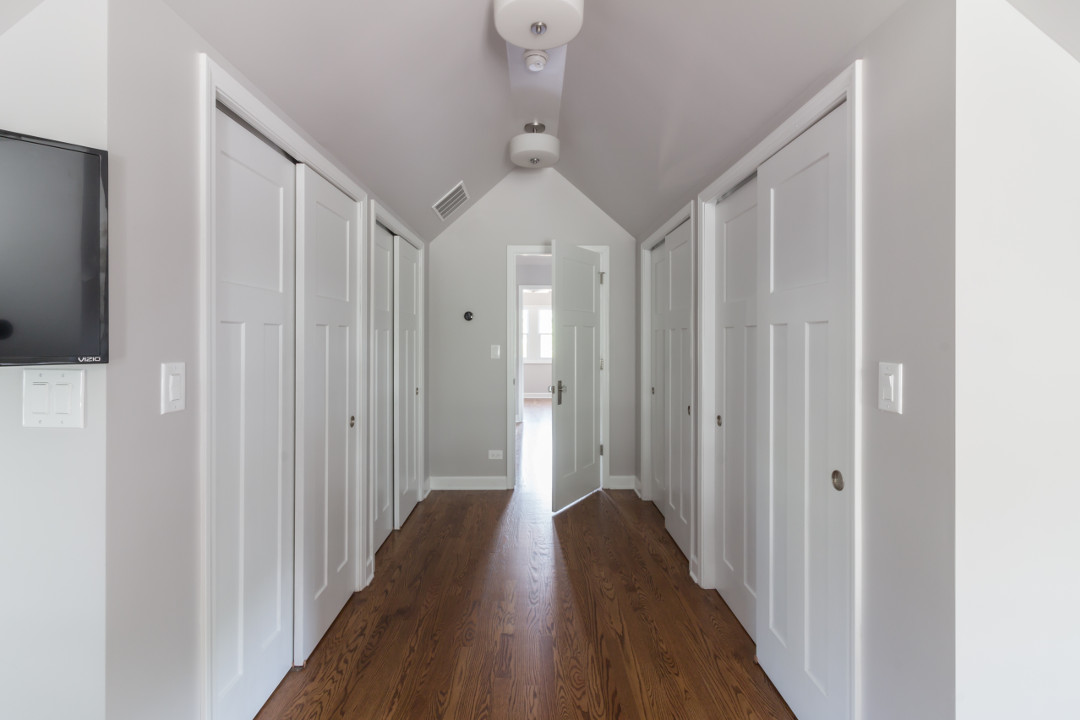 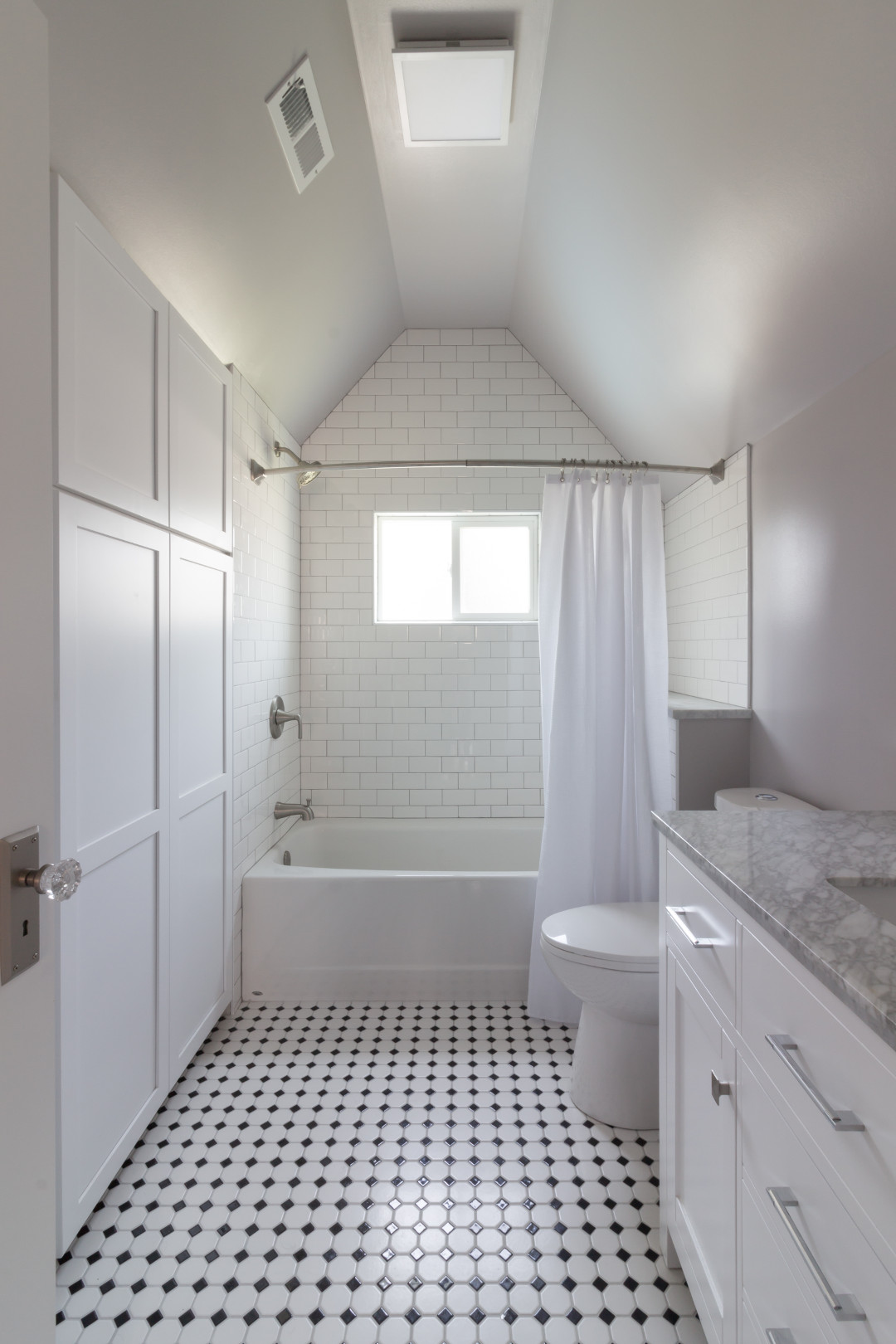 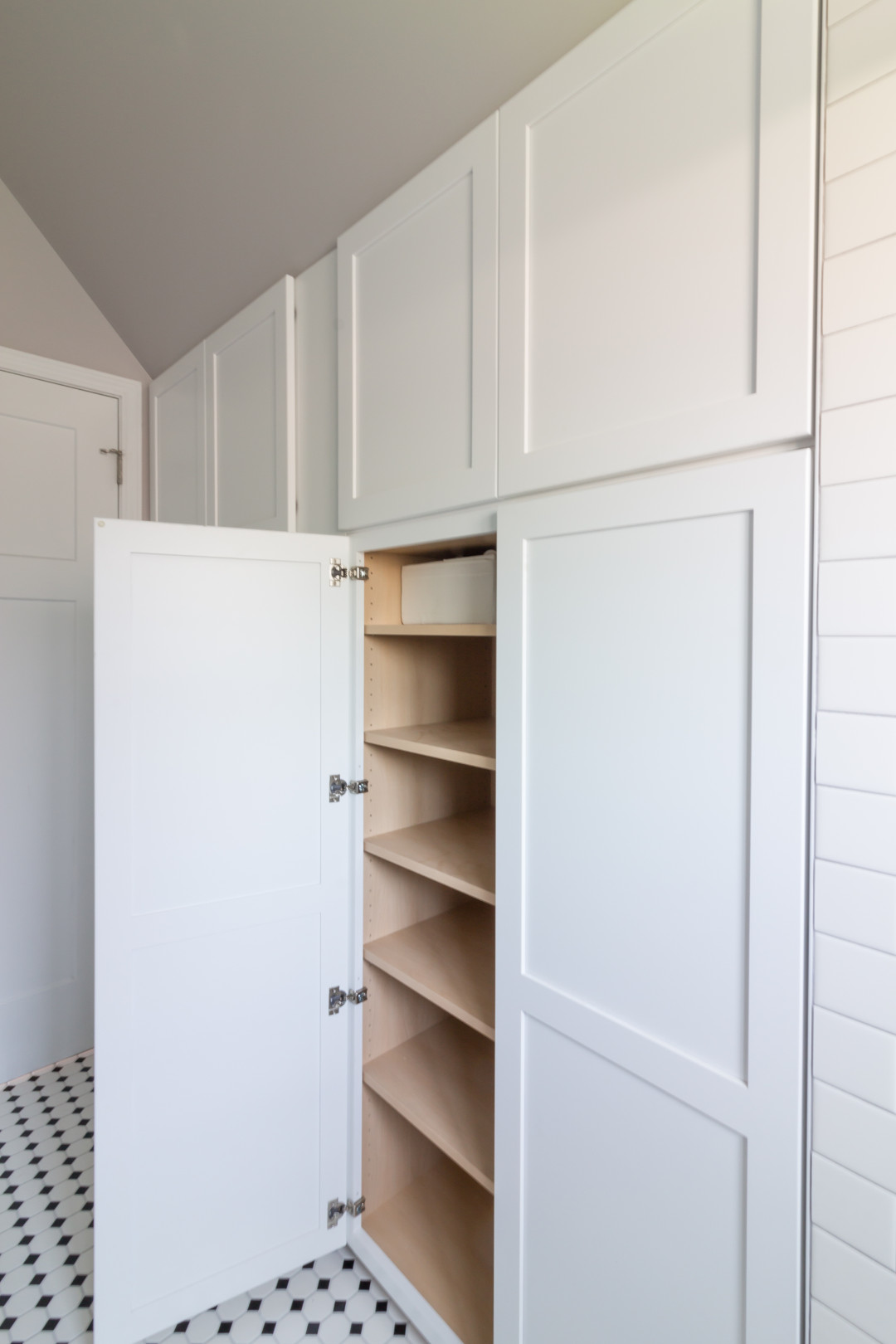 The stairway to the attic used to hide behind a door. Initially, Jennifer and David were concerned about opening the stairway, but they are so happy with the bright and airy outcome that they would now like to do the same for the basement stairs. They saved the old door and are deciding how to repurpose it. 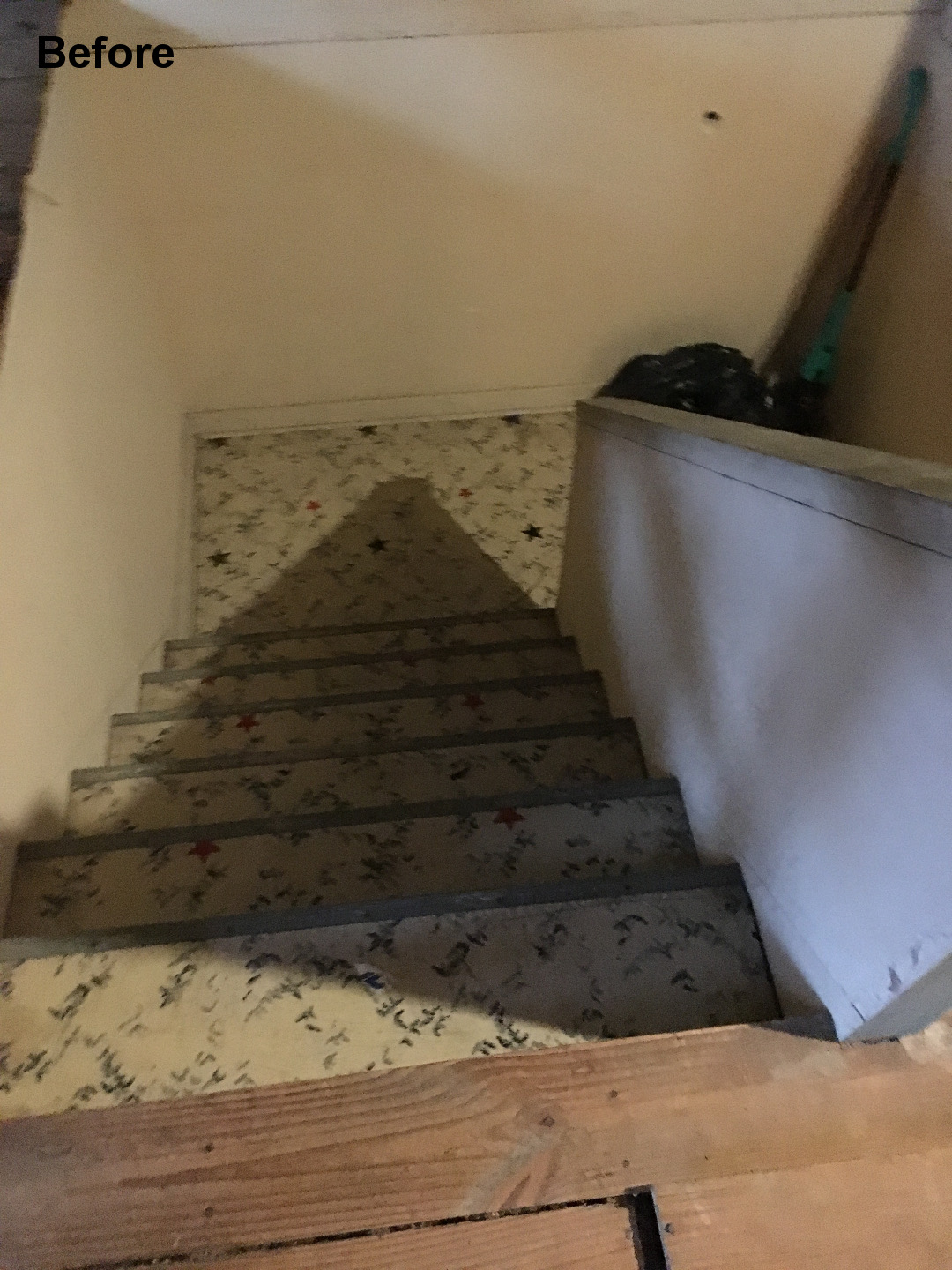 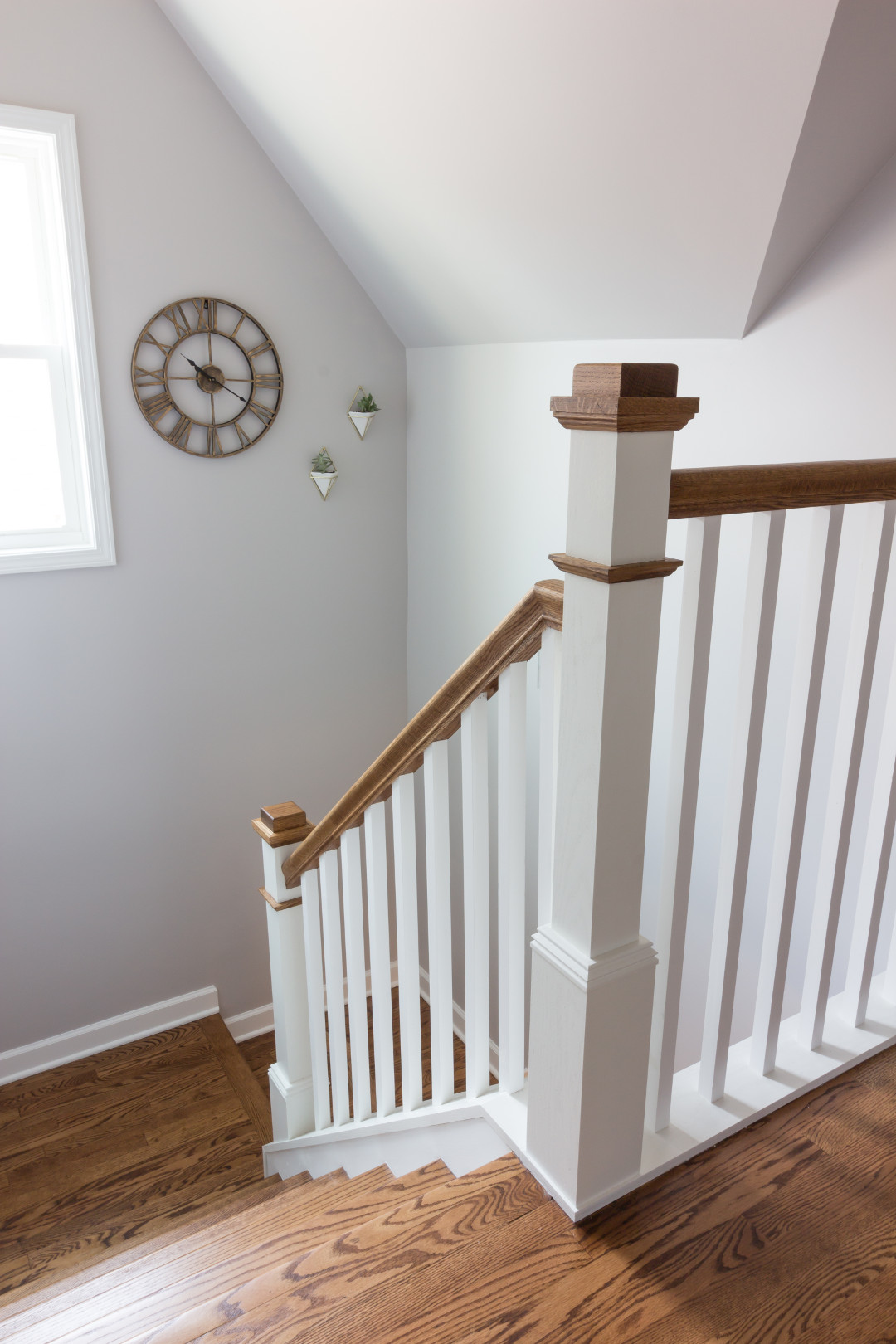 The interior design was done by Jennifer. She used Pinterest to organize all their selections for the project, from plumbing fixtures to lighting to furniture.

Jennifer describes her style as “Mid-Century Modern mixed with traditional elements, classic and timeless.” Instead of looking at finished rooms for inspiration, or sticking to a single style or brand, Jennifer finds a piece she likes and then finds other pieces to complement it, looking at what elements they have in common. For example, she knew she wanted a mirror above her bed that would play off the angles of the ceiling, and a Google search led her to the perfect fit at Walmart. The ceiling fans are another unique find, from Amazon.

The dresser is an Ikea piece which Jennifer customized by painting the drawers white and adding hardware; she is currently working on new nightstands to complement it. 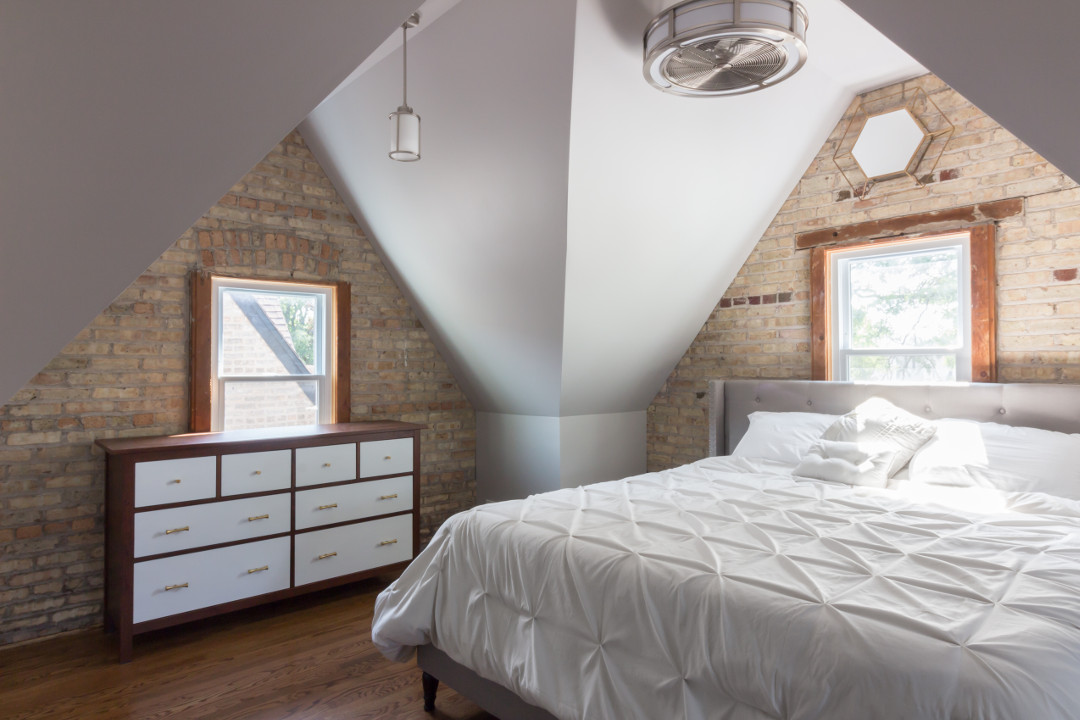 The walls are painted Grayish by Sherwin Williams and the oak hardwood floor has a custom stain to match the first floor.

The family lived in the house throughout the six months of near-daily construction. Jennifer says the first month was the hardest, as she was working from home with limited electricity. To make things easier on the family, we built a temporary staircase so workers could access the construction area directly. Jennifer calls the idea “genius,” saying it addressed their concerns about keeping the non-construction areas clean and safe for their kids. 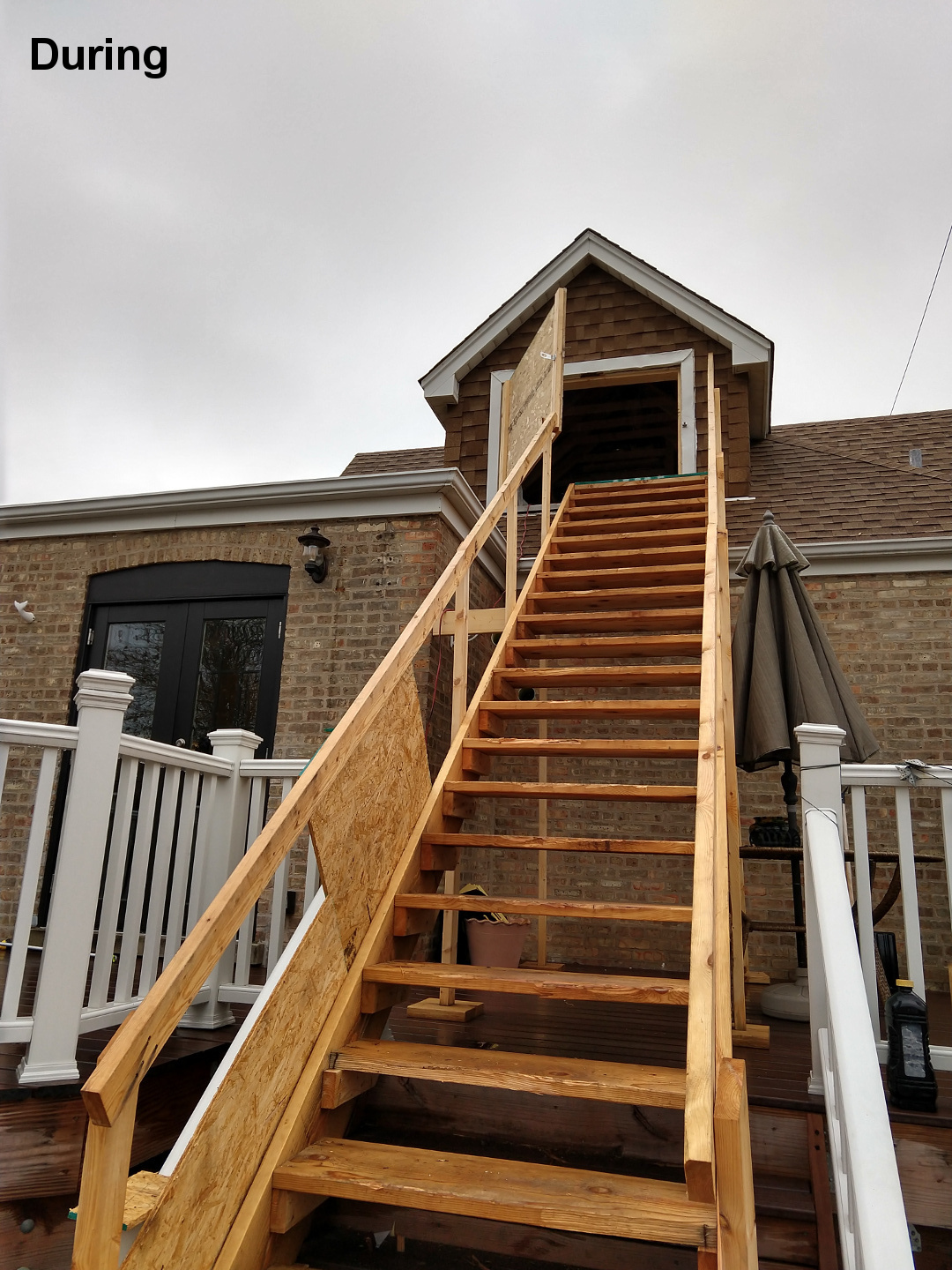 Revisiting the question of whether to move or remodel, Jennifer says it feels like they did move because everything has changed. Both boys now have their own bedrooms and they love playing upstairs too. Jennifer and David took the opportunity to get new furniture as well.

This project is proof that you can still get a dramatic transformation while respecting the original architecture - if anything, the architectural constraints can inspire creative solutions and the original elements can add great character. It’s the best of all worlds: a house that feels bigger, is fully functional with modern conveniences, is durably built to code, and still retains the classic character the owners first fell for.

Thank you to Jennifer and David, as well as Dan Hatch, for a wonderful partnership! We hope you enjoy it for many years to come.

If you would like to learn more about our general contracting services or get started on your attic conversion, please get in touch.