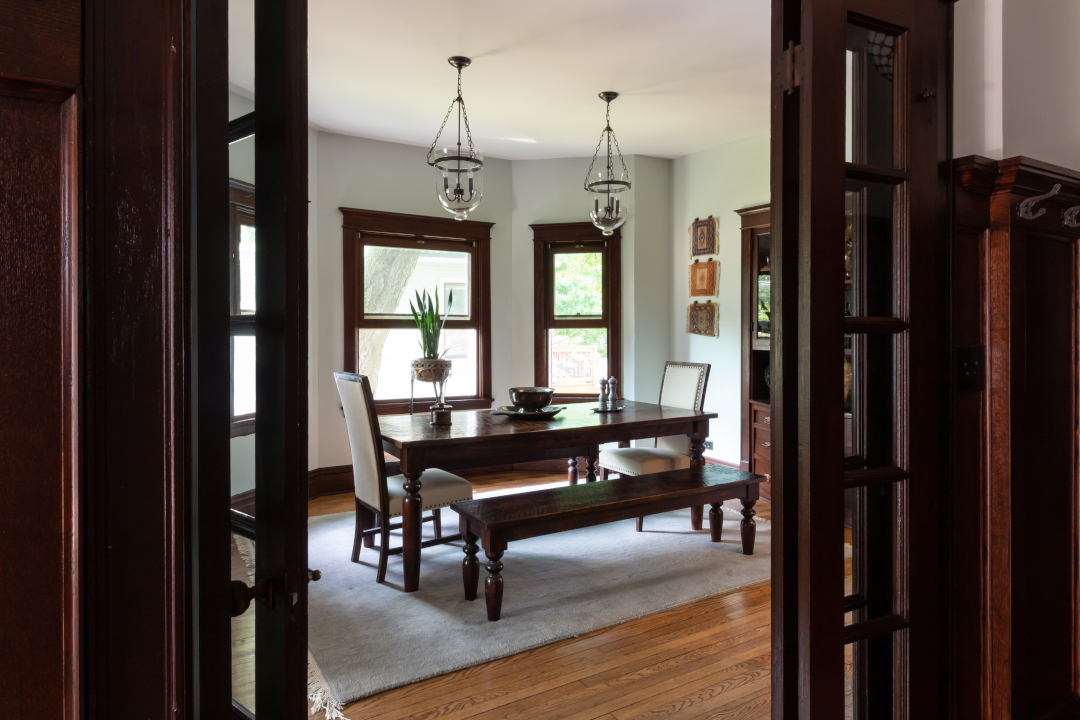 It’s a challenge to find a historic home in Chicago that has most of its original elements. Our clients-to-be were searching for just that, and lucked out when they found an Irving Park home that had barely been updated since it was built over 100 years ago. It retained a closed floorplan, the original oak woodwork and floors, a built-in dining room hutch, french doors, stained glass windows, a clawfoot tub, and even push button light switches! The only rooms that had been updated (many decades ago) were the kitchen and bathrooms. The new owners were able to look past the state of the house—all of the beautiful features were in desperate need of some TLC—and see its potential. The renovation was designed by Northlight Architects, with Leader Builders as the general contractor. While not a strict historic preservation or restoration (slight changes were made to the floorplan and some period-appropriate elements were added), the goal was to work with the original elements and stay true to the character of the home. If anything, this diamond in the rough now has more character than ever. Are you ready to see some seriously satisfying before-and-afters?

Let’s start with the foyer:

The first thing you see when you walk in is a nook that was once a sad, doorless closet. It’s amazing what a little molding, a beautiful pendant light, and some ornate coat hooks can do!

The foyer also features a view into the living room and dining room:

The entry to the living room, with those fabulous original french doors, stayed the same. However, as you can see in the “before” photo, the entry to the dining room was originally a standard door-size opening. We built a larger opening to mirror that of the living room, and relocated another set of french doors formerly separating the living and dining rooms. The flow, and the light, has much improved! The panel molding on either side of the french doors (and throughout the foyer) is also a new addition, although it looks like it’s always been there.

Here’s a closer look at the living and dining rooms (we love how the french doors frame the view!): 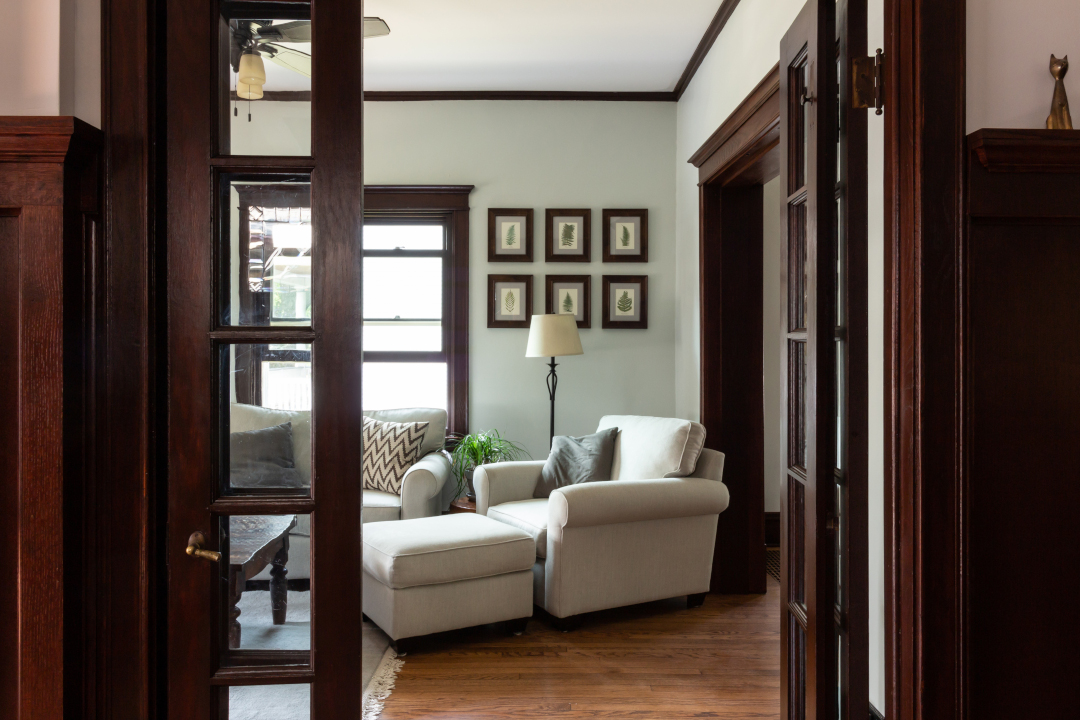 Moving into the dining room, with a better look at the built-in hutch:

The hutch stayed, of course, along with the rest of the woodwork. They were protected throughout construction and refinished afterwards. To the right of the hutch, you can also see the most modern update—the opening of the dining room to the kitchen. Lovers of closed floor plans, fear not—the dining room still has walls on all four sides so it feels pretty private. We respect how the architect and owners balanced their appreciation of the home’s historicity with these few, conscientious improvements to the flow and light.

And now for the kitchen, the most dramatic transformation:

There was nothing to save from the original kitchen, as it had already gone through an unfortunate remodel, so we fully gutted the room and replaced all mechanicals. The new stained oak cabinets provided by the owners unite the kitchen with the rest of the home, while the leathered granite countertops and herringbone floor tile add great interest. Removing the soffit and extending cabinets to the ceiling makes the room feel twice as tall. Yup, this is the same view—a window was sacrificed for a more convenient range location—but light pours in from new glass sliding doors (off camera, left). The wall between the dining room and kitchen was opened just enough to add bar seating and help that natural light reach the dining room.

Returning to the foyer, for a look at the staircase:

Enhancements to the woodwork continue on the second floor landing:

The owners found this amazing built-in mirror at an antique store, and the second floor landing, opposite the bathroom, was the perfect place for it. As you can see from the “during” photo, we also trenched the walls of every room to update the electrical system. No need to fully gut rooms and replace all the original plaster with drywall—plaster is a better temperature and sound insulator anyways—and you can’t tell once it’s been patched. Now take a closer look at the light switch (to the right of the built-in). It’s a push button light switch, which is a rare find. The house came with push buttons original to it, and luckily a few companies have started manufacturing historical replicas that comply with modern electrical standards, which is what we used.

We’re hoping for an invite to this guest bedroom:

In addition to refinishing the woodwork and replacing the electric, we relocated and enlarged the closet door for easier access. (Excuse the bathtub that wandered into our “during” photo—we’ll get to that in a minute!) The other two bedrooms received similar treatment.

Moving along to the second floor bathroom: 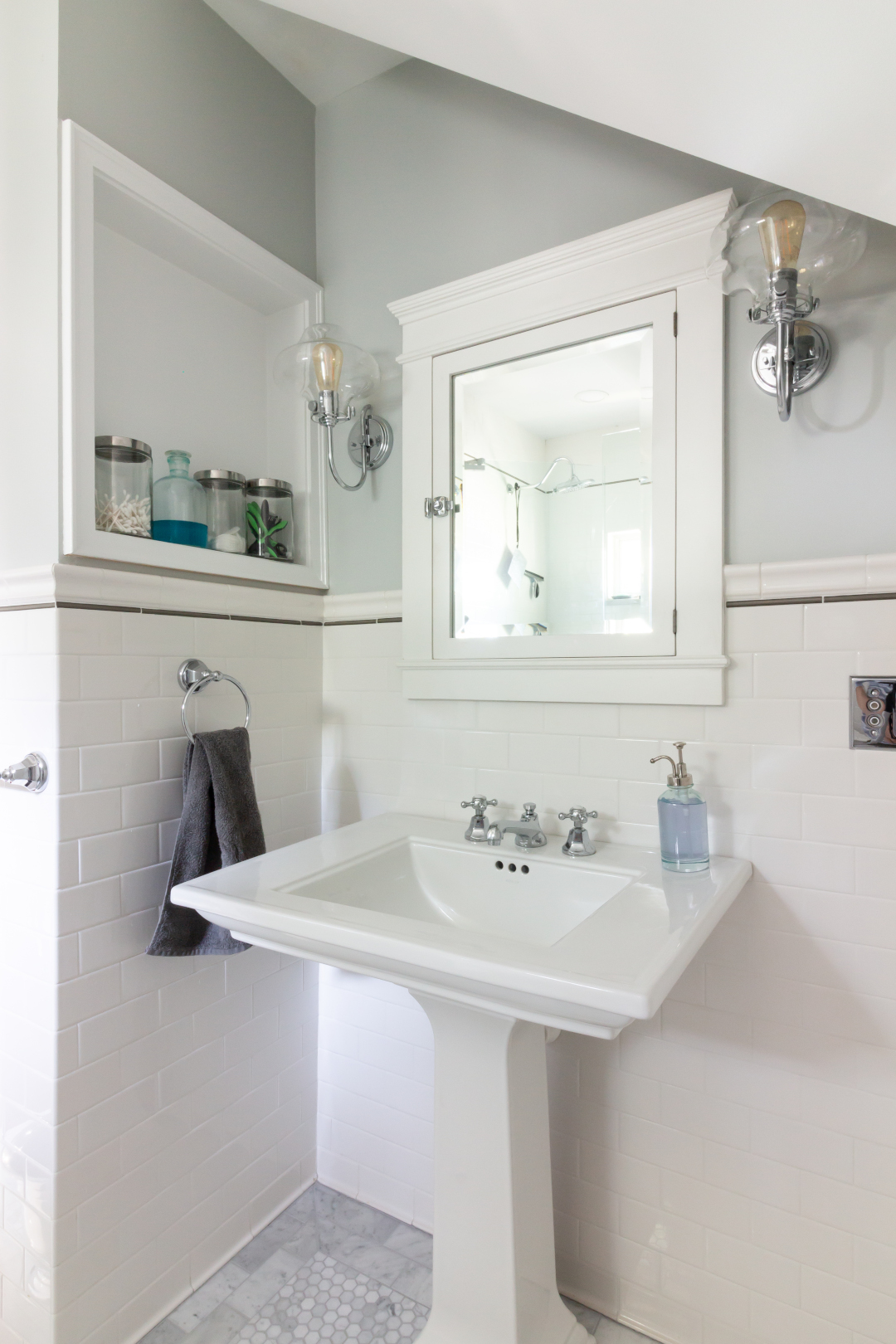 Being a historic house, there was only one (pretty cramped) bathroom serving the entire second floor and it was in pretty poor shape when we first saw it. The clawfoot tub, while a great feature, was not the most practical use of space. The owners and architect decided to replace it with a custom shower, and rearranged the floor plan to make better use of space. We also stole space between studs and from the knee wall to add not one but three built-ins! A pedestal sink is a much more period-appropriate choice than the wood-veneer vanity there before, and further helps open up the room.

But we wouldn’t just throw away the clawfoot!

Refinished, it found a new home in the first floor bathroom:

We hope you enjoyed this transformation as much as we did! And if you have a historic home that needs some TLC, don’t hesitate to get in touch!